This article was kindly submitted by Alejandro Moledo, New Technologies and Innovation Officer at the European Disability Forum.

The European Accessibility Act has the potential to make the European internal market more inclusive and accessible for 80 million persons with disabilities. In December 2015, the Commission released a proposal for a European Accessibility Act[1], which is now at its final stage of negotiations. Many aspects of the proposed Directive have been challenged by users, industry, and governments, but ebooks remain one of the items in which, thankfully, there is a broad consensus.

When the European Union (EU) was examined by the UN Committee on the Rights of Persons with Disabilities one of the main recommendations from the Committee[2] was to present this EU accessibility legislation which the European Disability Forum (EDF) and its members have been strongly advocating for, for many years. Three months later, the Commission launched the long-awaited European Accessibility Act (EAA), not without some surprises too.

Firstly, the EAA is an Internal Market Directive. This means that the Commission aims at harmonizing existing and potential national legislation on accessibility by setting out common accessibility requirements for certain products and services across the EU. This will benefit companies and public agencies alike, because, once adopted, the accessibility requirements of the Directive will be further detailed in standards and technical specifications that will be easily used and followed by them. No more different accessibility standards for different countries.  Everybody wins: citizens, companies, public agencies, and governments.

Secondly, the Commission introduced exemptions in cases of a disproportionate burden to implement accessibility, or when applying accessibility constitutes a fundamental alteration of the product or service. For instance, a special telephone with a simplified use for older people will not need to comply with all the accessibility requirements for smartphones. Obviously, it will need to be proved. The body entitled to check and enforce this legislation will be the different national market surveillance authorities. These authorities will have the power to request a company, for example, to fix the accessibility of a given product if they want to place it in the European market, or to impose penalties if the problems remain unsolved.

Even though the structure and the approach of the Directive were promising, the scope of the EAA was disappointing. The proposal has a very strong component on new technologies: ebooks, computers, operating systems, self-service terminals (e.g. ATMs, check-in machine, etc.), smartphones, telephony and emergency services, TVs and audiovisual services, banking services, and ecommerce. However, it also lacks crucial products such as household appliances and the approach to transport services was very limited. More importantly, accessibility requirements for the built environment were not mandatory. What is the point of having an accessible ATM if we cannot access the bank?

Additionally, the EAA proposal did include a very important aspect within its scope: the use of accessibility requirements in public procurement and use of EU funds. Other EU acts already require to “buy accessibly”, however they do not explain how to do it. The EAA details the requirements to achieve this and to ensure that taxpayers money will not be spent anymore on inaccessible products, services and facilities that discriminate persons with disabilities. Even industry organizations agree with us on the importance of including public procurement in the EAA[3].

For example, let’s imagine that a public authority wants to publish an ebook. When drafting the technical specifications of the tender, the accessibility requirements for ebooks, or the relevant standards that comply with those requirements, will need to be included in the call. Therefore, in order to be considered as an eligible bidder, the interested publishers will have to prove that they will publish an ebook that is accessible.

What Happened with the Proposal?

Once the proposal was presented by the European Commission, the European Parliament and the Council (representing EU Member States) began to propose changes to it, and the work of accessibility advocates has not been easy. Surprisingly, the European Parliament, which is often very supportive of the positions of civil society organizations, did not have a positive approach at the beginning. We did our utmost[4] to switch its initial position. The final report of the Parliament[5], voted in September 2017, does include some improvements, but also some deteriorations. On the positive side, the Parliament supports the inclusion of accessibility requirements for public procurement and EU funds, and proposes mandatory requirements for the built environment for the provision of certain services in some circumstances. It also broadens the scope of transport services to cover urban modes of transport as well, and adds accommodation services. However, it fully exempts all microenterprises, and excludes audiovisual content from the Act.

In parallel, EU Member States agreed on December 2017 on a common position[6] which does also contain some pro’s and con’s. The Council text excludes completely public procurement and EU funds from the Act, as well as any reference to the built environment. It does exempt microenterprises, but only those providing services, hence ensuring the importers and distributors will need to check whether a product complies with accessibility. Furthermore, regarding emergency services, Member States do not want to include requirements for the emergency centers – making accessible emerging communication impracticable. Nevertheless, the accessibility requirements proposed by the Council are more robust and comprehensive than the Parliament, which proposed requirements which were in some cases very vague or simply examples.

Having these two positions ready, the inter-institutional negotiations, known in Brussels as “trilogues” (Commission, Parliament and Council) started on March 5, and both the Parliament and the Council seem confident that, despite the difficult discussions ahead, the EAA might be adopted in 2018. For disability organizations getting the Act adopted this year is of high importance, as next year the EU will hold its elections and we do not want to miss the political momentum. Having said that, people with disabilities will not want just any Accessibility Act, and we keep advocating for a meaningful and ambitious Directive that truly makes a change in the everyday life of Europeans with disabilities.

And What About ebooks?

During the negotiations in the Parliament, EDF and the Federation of European Publishers jointly sent a letter to the Member of the European Parliament responsible for this file calling for the inclusion of two important aspects for the provision of accessible ebooks: the inclusion in the scope of the ereaders (both hardware and software), as well as the metadata on the accessibility of ebooks. These proposals were taken up by both the Parliament and the Council, and we can say that there are not big changes in their approach to these requirements. This means that there is almost certainty that these two aspects will be in the final text.

Both institutions do propose to add ereaders in the scope of the Directive. The ereaders will then have to comply with the general accessibility requirements for Information and Communication Technologies, including their user interface. Additionally, the ebook providers will also need to inform the users about the functioning of the service and its accessibility characteristics (i.e. the above-mentioned metadata). They will also have to design their websites and mobile applications in an accessible manner and provide information about complementarities with assistive technologies (e.g. screen readers, Braille displays, coupling with hearing technologies, etc.).

Finally, when it comes to the accessibility requirements of the ebooks themselves, the amendments introduced by the EU co-legislations clearly point at the characteristics of the EPUB 3 standard, which already incorporates accessibility guidelines. Thus, the proposed requirements in the Directive talk about access and navigation throughout the content, dynamic layouts, flexibility and choice in the presentation of content, prohibition of preventing assistive technologies to work properly and, among others, it also ensures that Digital Rights Management measures do not block accessibility measures.

All in all, it seems that legislators, users and the industry agree on adopting a European Directive that truly underpins the efforts to make publishing more inclusive and accessible. Despite the potential (and yet not decided) exclusion of microenterprises delivering services, including therefore ebooks, which will especially affect small publishers, the EAA can definitely have an impact in boosting accessible ebooks so that everybody in Europe will be able to enjoy reading them, no matter how they choose to read and through whatever device suits their purpose. 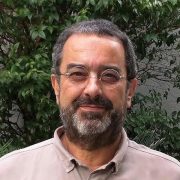 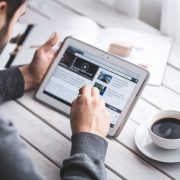 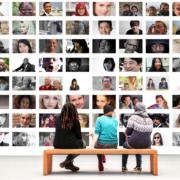 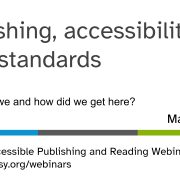 Publishing, Accessibility, W3C Standards—Where Are We and How Did We Get Here? (W)

Help Improve Reading Experiences for EveryoneAccessible Publishing Webinar: What You Need to Know to Get Accessibility R...
Scroll to top