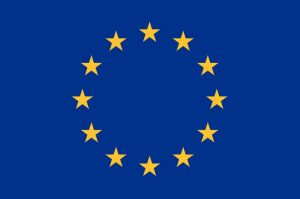 The clock is ticking. The European Accessibility Act is coming and will impact the way many publishers globally produce content that is sold in the European Union irrespective of where it originated.

The EU Accessibility Act is currently being transposed into national laws which will be complete by June 28, 2022, and the Act itself is scheduled to come into force on June 28, 2025. At the time of authoring this article, we have over 3 years before that date which may feel like a healthy amount of time. However, we all know that change and particularly change to established business practices can take a significant amount of time to implement correctly.

Throughout Europe some government entities, non-profit organizations, publishing associations, and publishers have been collaborating to raise awareness of the EU Accessibility Act, supporting publishers and organizations in their supply chain to learn about accessibility, and starting to prepare for the Act. Anecdotal evidence suggested that while some regions are actively progressing this activity, other regions have made little or no progress at all.

To gain an understanding of the activity taking place throughout Europe, encourage sharing of practices, and signpost the available resources, a survey was conducted. This work was coordinated through the DAISY Consortium hosted EU Inclusive Publishing Forum, a collaboration network of organizations supporting the implementation of the European Accessibility Act as it relates to digital publications.

This baseline survey was conducted to assess the current activities of EU Members, including identifying:

Promoted through the network and disseminated directly to people in EU member countries to complete the survey was sent to as many people as practical to respond on behalf of their country. It did however prove challenging to find a suitable individual, organization, or government department in every country, especially some of the smaller EU countries.

To encourage participation in the survey it was agreed that no identifiable information would be publicly shared about any of the responding countries, but a list of the participating countries can be found at the bottom of this page.

Responses were received from only 14 of the 27 EU members, however those regions responding cover 74% of the EU population. We can only speculate as to why some countries did not respond, but there are likely to be two primary reasons:

The countries who did respond reported a broad range of experiences and activities through the survey, with some countries responding multiple times offering slightly differing perspectives. This indicated that while some activity in preparing for the European Accessibility Act was underway, some of the respondents are still at the early part of this journey, and communication between interested parties (government departments, the publishing community, and beneficiary groups) had scope for improvement.

Despite governments actively progressing the requirement to transpose EAA into national laws, the survey found only half of the countries that responded had a government ministry assigned to support the implementation of the Act. Some countries had multiple government departments actively involved in supporting the implementation of the Act, typically with one department leading. Whereas other countries highlighted challenges between legislation implemented at the national level impacted practices governed regionally.

Only half of the respondents reported having a steering group or stakeholder platform to guide and advise on accessible publishing and reading.

At the time of responding only 4 of the 14 countries responding had any web-based resources designed to support awareness and implementation of accessible publishing in their country, although some indicated that work was underway to create online resources. The availability of training was reported by 5 countries, which ranged from trainers in other countries being brought in to assist in educating publishers through in-person courses, to online resources being developed. Participation at mainstream publishing conferences and the hosting of special events were also reported.

When asked to rate their current state of readiness only 2 were confident that everything was in hand, reporting that there was a plan which was on track. Most respondents (9) highlighted that activity was taking place but concerns remained about being ready. 3 responses were received indicating some alarm that very little seemed to be happening. In some instances of duplicate responses, government entities reported being more confident in their readiness than other organizations actively involved in the process.

Finally, a broad range of pressing needs were identified, including the following themes:

The survey highlighted that some excellent work was already taking place throughout the EU to prepare the publishing industry for the implementation of EAA, but all indications suggest that significant work remains in readiness for June 2025.

Collaboration between countries, sharing of best practices, training resources, and involvement in the DAISY Inclusive Publishing Forum all offer promise for the future.

We aim to repeat this survey as we progress towards 2025, tracking the progress of countries in preparing for the Act and facilitating sharing resources and best practices between active parties.

Thanks to members of the DAISY Consortium EU Inclusive Publishing Forum for supporting this activity, and to all the respondents who completed the survey from the following countries: Austria, Belgium, Denmark, Estonia, Finland, France, Germany, Ireland, Italy, Lithuania, Slovenia, Spain, Sweden, The Netherlands. 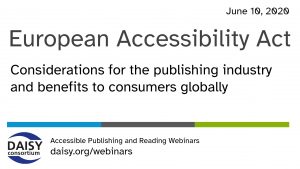 In our series of free weekly webinars June 10th saw a session focused on the new European Accessibility Act and how we might approach this as an industry.

Full Video of the Webinar

Inmaculda opened this webinar by giving us an overview of the EAA and how this applies to the publishing industry with regards to  services (ebook content and software) and products (such as ereaders), which fall within the scope of this new legislation. Both have accessibility obligations to meet within strict timelines and these were explained as well as transition periods

Cristina Mussinelli gave us an overview of how the EAA is going to affect our industry and how we need to respond to the timelines for implentation, from various points of view—publishers, legal and consumers. We need to create an accessible publishing ecosystem to ensure that all areas of our digital workflow, from content creation through to paying for ebooks online and the accessibility of our reading app, are fully accessible. Every element of this workflow needs to play their part in complying with the requirements of the EAA.

By adopting international standards publishers can work towards creating born accessible digital content ie. content that is accessible from inception and available within mainstream publishing outlets. Accessibility metadata should be included as well as an accessibility statement describing accessibility features.

Anne Bergman showed how the FEP plans to raise awareness and why this is so important. The 29 publishers associations across Europe are ideally suited to promote accessibility obligations at bookfairs and in cooperation with booksellers and technology vendors. The Aldus project that unites bookfairs is organizing accessibility camps and various accessibility events to get publishers involved and play an active role in moving forward.

Some Concrete Organizational and Technical Advice

Luc Audrain, an inclusive publishing consultant in France, but formerly of Hachette Livre, talked about the move towards accessibility from a practical point of view and outlined organization and technical steps that publishers need to concentrate on in order to comply with the EAA.

Discover the other webinars we’re running!